Chat with us, powered by LiveChat

Posted at 09:30h in DUI by birminghamdui 0 Comments
0 Likes
Share 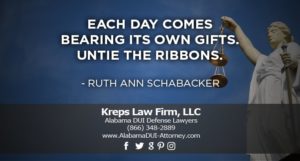 Police: Man in viral video arrested after firing gun on I-10

The man featured in a viral video involving law enforcement in Jackson County is now in police custody on multiple charges.

The Jackson County Sheriff’s Department identified him as 30-year-old David Achenbach. He is suspected of pointing a gun at another vehicle and firing two shots into the air while traveling on I-10.

Charges against Achenbach include DUI, felony possession of marijuana, reckless driving, exhibiting and discharging a firearm. The gun recovered was a Springfield XD-40 handgun, police say.

At about 2:10 p.m., officials received a call about a road rage incident that began in Alabama.

In the viral clip, a man can be seen standing with his hands up, faced by numerous law enforcement vehicles and officers with their guns drawn. The video has gained more than 30,000 views on Facebook.